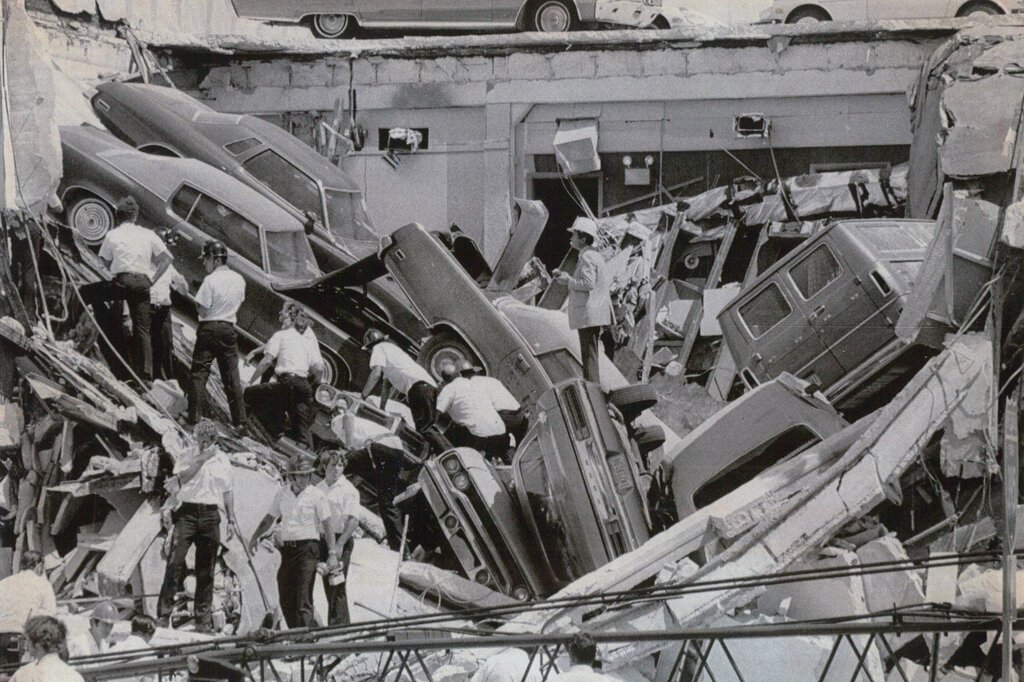 The Federal Drug Enforcement Administration building in downtown Miami collapsed in 1974. John C. Pistorino was early into his engineering career, and worked in the district as a consulting engineer. Building collapses were extremely rare at the time, so this sparked an investigation. Which lead inspectors to determine that substandard building materials used by contractors played a role in the tragic incident. Further investigation by County Officials also found that the unique South Florida environment cast doubt on their findings. The following elements were found to cause damage to buildings, but are not limited to moist air, salt water, and strong wind.

After much investigation, all parties involved came to the conclusion that it was not a single element that caused the collapse. After studying, and researching John C. Pistorino and his team observed that the building had on-going corrosion which had not been addressed. There were also cracks in the concrete members that were not repaired correctly. They were just simply painted over on a continual basis. Researchers including John C. Pistorino determined that the building was equivalent to a 40-year-old construction.

As it was initially built in 1925 and undergone periodic repairs. Six years earlier, in 1968, an engineer had examined the structure and determined it to be safe. Pistorino and his team were requested to provide a suggestion as consultants to the Dade County Board of Rules and Appeals. To ensure that such an incident never occurs again. They advised that any structure older than 25 years be examined by a qualified structural engineer and certified as safe for tenancy. There were numerous structures in this classification. Thus it was ultimately agreed to utilize the 40-year standard, with a follow-up every 10 years after that.

Owners of structures 40 years or older were required to get a “Notice of Required Inspection” from the building authority for recertification. According to the guidelines for Building Recertification issued by the Building Official. The owner of a building was required to submit a written report. Which was prepared by a Professional Engineer or architect registered in Florida. Certifying that the building was structurally safe for occupancy. All buildings, with the exception of single-family homes, duplexes, and small constructions, were subject to this. This program was realized in order to ensure that buildings were structurally safe for occupancy.

Although electrical deficiencies may not seem major. If they are not addressed it can lead to loss of power or even a potential fire. Electrical issues are very delicate and can lead to very catastrophic events. Which is why this part of the recertification was included.

Miami-Dade County was the first county to require recertification for buildings over 40 years old. Fort Lauderdale followed a few years later. Thanks to the inspections that are carried out, the residents and customers of these properties are kept safe.

It sounds harsh to say, but thanks to this collapse many other lives have been saved, and collapses have been avoided. Moreover, the building recertification program has had many amends over the years, but the purpose remains the same; to ensure the safety of the occupants.

New Mandates and Why?

Much like the Federal Drug Enforcement Administration building collapse which resulted in the building recertification program being implemented. The catastrophic collapse of the Champlain Towers on June 24, 2021 also resulted in newer and stricter mandates. After the collapse of the Champlain Towers, much investigation was done to evaluate what could have possibly caused this. The incident disclosed that multiple buildings in Miami-Dade and Broward counties, as well as the Champlain Towers, had not undergone the imperative recertification. The building recertification program was created to ensure that the buildings remained safe for occupancy. However, the building was meant to be maintained and deficiencies were to be cared for. Nonetheless, some building owners did not do so until the 40 year mark hit. This is extremely irresponsible because if the building had deficiencies that were overlooked, it could have not resulted well.

After reviewing ways to avoid this from ever occurring again, the Florida legislature decided to make new amends.

All structures built prior to 1982 and already undergoing initial recertification inspections under Miami-Dade’s 40-Year Program will follow the already established schedule. All measures that have been taken subsequent to the Champlain Tower collapse were implemented to ensure public safety and prevention of structural and electrical failure.

Our firm is covered with all the appropriate business insurances to have a backup and take care of the safety of our services, employees, and clients.

Join the Department of Regulatory and Economic Resources for upcoming workshops following the link below, where the latest changes and recertification procedures will be discussed.

To see the full Legislature relating to existing buildings and unsafe structures download the pdf below.

Eastern Engineering does not take credit for the image featured in this article, it was strictly derived from The New York Times published on June 26, 2021.